Dr. Ed Walker is an independent consultant, and President of the geologic consulting firm, PetroLogic Inc. based in Lakefield, Ontario Canada.

Dr. Walker has over 30 years of technical and management experience in exploration and resource development of precious, base, and rare metal, and industrial mineral deposits. He has designed, managed and implemented mineral exploration programs to test the mineral resource potential of properties including, precious and base metal deposits; field mapping, sampling, and drilling, geochemical, textural, and mineralogical testing, design, implementation, and monitoring of QC and QA programs and, computer compilation and 3D modelling of mineral resource data, as well as process mineralogy, beneficiation, and predictive metallurgy, and geological and mineral resource characterization.

He is a Qualified Person, (QP) authorized to write NI 43-101 technical reports for mineral exploration and, is registered in good standing with the Association of Professional Geoscientists of Ontario, (APGO). Dr. Walker is a joint author of the NI 43-101 Technical Report Assessing the Au, Cu Porphyry Potential of Pershing Resources’ New Enterprise Project near Kingman Arizona.

Dr. Walker received his BSc in Geological Sciences with first class honors from Brock University in 1984 and completed his doctorate work at the University of Western Ontario in 1991. 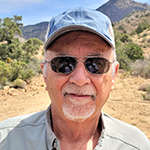 Luis Vega is a senior geologist with over 40 years of experience in working for publicly traded mining companies involved in exploration for precious and base metals His work has focused on investigation of polymetallic and porphyry copper deposits, as well as porphyry gold and sedimented hosted gold deposits throughout North America and South America. Mr. Vega is bilingual speaker in Spanish and English, and has extensive experience in business negotiations in Latin America with both private and governmental entities. He has directed exploration programs in the US, Mexico, Costa Rica, Honduras and Argentina and conducted submittal evaluations in Panama, El Salvador, Nicaragua, Colombia, Ecuador, Peru, Venezuela, Brazil, Uruguay and Chile.

He has worked for or contracted with companies such as Utah International, Duval Corporation, and Battle Mountain Gold Company, (BMGC),. While at BMGC, he established an exploration office in Chile and discovered the Angelina Porphyry copper/gold occurrence, which was sold to Gold Fields Corporation. He also participated in the discovery and definition of El Higo epithermal gold deposit in the Dominican Republic and, the Casposo Epithermal gold deposit, Argentina. In Bolivia, he supervised and conducted the early geologic work at the Kori Kollo Mine resulting in the definition of over 8 million ounces of gold resource.

While with Utah International he assisted with the definition drilling of several poly-metallic exploration projects in Utah.

During his time with Duval Corporation as head of exploration at the Mineral Park Mine near Kingman, Arizona, Mr. Vega directed the exploration programs that resulted in identification of additional copper and molybdenum reserves. He also co-established and managed the exploration operation for Duval in Argentina. Duval is a division of Pennzoil Corporation.

Mr. Vega is a co-author of several technical papers including:

Nick Barr is an independent consulting geologist with over 35 years of experience, working with numerous public and private companies in the mineral exploration business. He has worked for or contracted with companies such as, J.H. Montgomery Consultants, Cambior Exploration USA, St. Joe Gold, Technica Group Inc. and GeoXplor Corp., among others. His work has primarily focused on gold-silver and base metals, and including massive sulfides, chromite, uranium, lithium, and industrial/rare earth metals, mostly in Arizona, Nevada, Idaho, Utah, California and Oregon.